Los Angeles, We Have a Problem. 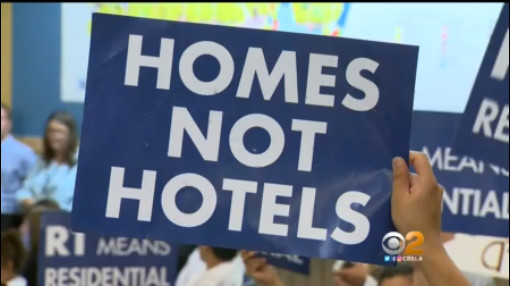 Last summer, Mayor Garcetti entered into an agreement with Airbnb to collect transient occupancy taxes (TOT) similar to those paid by hotels. This agreement was made as the city considered regulation on short-term rentals and moved forward with taxation without regulation. To make matters worse, the agreement included no real auditing of the funds being paid—so essentially the City was taking Airbnb’s word that they were submitting the correct amount of taxes.

We were outraged. How could we enter into an agreement with an industry that is operating illegally in most cases? How could we “legitimize” short-term rentals by using this money to fund the City's general fund?

Unfortunately, it appears that our fears have become a reality. The City is once again facing a tough budget deficit and the Airbnb TOT has become a tempting drug that they are struggling to refuse.

It gets worse. It is estimated that the City received about $30 million per year from Airbnb. The validity of this number, or whether it is based on actual stays, cannot be verified. But, Airbnb has told the City that the only way it will continue receiving this $30 million is if the current status quo is maintained—meaning no regulation or cap on days that landlords can rent out their properties.

To add fuel to the fire, the Mayor released his budget for the upcoming fiscal year and the budget includes $36 million from Airbnb TOT—meaning no change to the current rules. Essentially, the Mayor’s budget assumes that there will be no limits on the number of days hosts are permitted to use short-term rentals.

Affordable housing and our neighborhoods cannot afford the Mayor’s plan. We cannot allow City Hall to make policy decisions based on its bottom line instead of the good of our City. Our neighborhoods are not for sale!

Sign our latest petition to demand that the City takes action to protect affordable housing and our neighborhoods NOW.

Keep an eye on your email for more ways to fight back in the next week!