Thank you to everyone who sent a letter asking the LA City Council PLUM Committee to pass Appendix A (the platform agreement for sharing HSO data with the City.) If you haven’t done so already, it isn’t too late to play an important role in influencing PLUM members by asking asking them to pass Appendix A. [email protected].

Residents of L.A. are sick and tired of illegal hotels driving them out of their homes!  Please reach out to the Mayor, City Council and Planning Department and tell them not to fall for Airbnb’s delay tactics. Click here to open & send email.

AIRBNB DELAYS: After being given a generous 11-month grace period before enforcement, Airbnb is now, at the last-minute, attempting to manipulate the City into allowing yet another delay in implementation and enforcement.

Councilmembers Mike Bonin, Bob Blumenfield, Paul Koretz, and Monica Rodriguez and neighbors from throughout the city will appear at a press conference this morning to call on the city to reject repeated efforts by the short-term rental industry to delay enforcement of the City’s Homesharing Ordinance.

After more than three years of debate, L.A. City Council approved short-term rental regulations in late 2018.  Mayor Garcetti duly signed the ordinance, which became effective July 1 of this year. To give short-term rental platforms and hosts more than ample time to become familiar with the program, the City postponed enforcement for six months.  Now that the compliance date is approaching, the short-term rental industry is trying to insert another delay.

Today, at the City Hall press conference, tenants victimized by harassment and intimidation from unscrupulous landlords seeking to replace their tenants with short-term vacationers will join with neighbors from community organizations throughout LA and with Councilmembers.

Hosts are aware that they must register.  Airbnb has bought off our housing already, and now they are trying to buy off City Hall.  Airbnb should be prepared to share relevant host and other legally mandated data with the City.  Airbnb is a sophisticated technology company that regularly shares its data.  Any counter-narrative is false and seeks to mislead the City Council and the public.

REMINDER: The City Council and Planning told the public that the Home-Sharing Ordinance will be enforced on November 1, 2019.  This must happen regardless of Airbnb’s scare tactics or whether Appendix A is passed at the October 22 hearing.  As a reminder, registration is done entirely online. For additional information, contact [email protected]. You can find the home-sharing registration portal here, along with a video tutorial on how to register and general home-sharing facts. 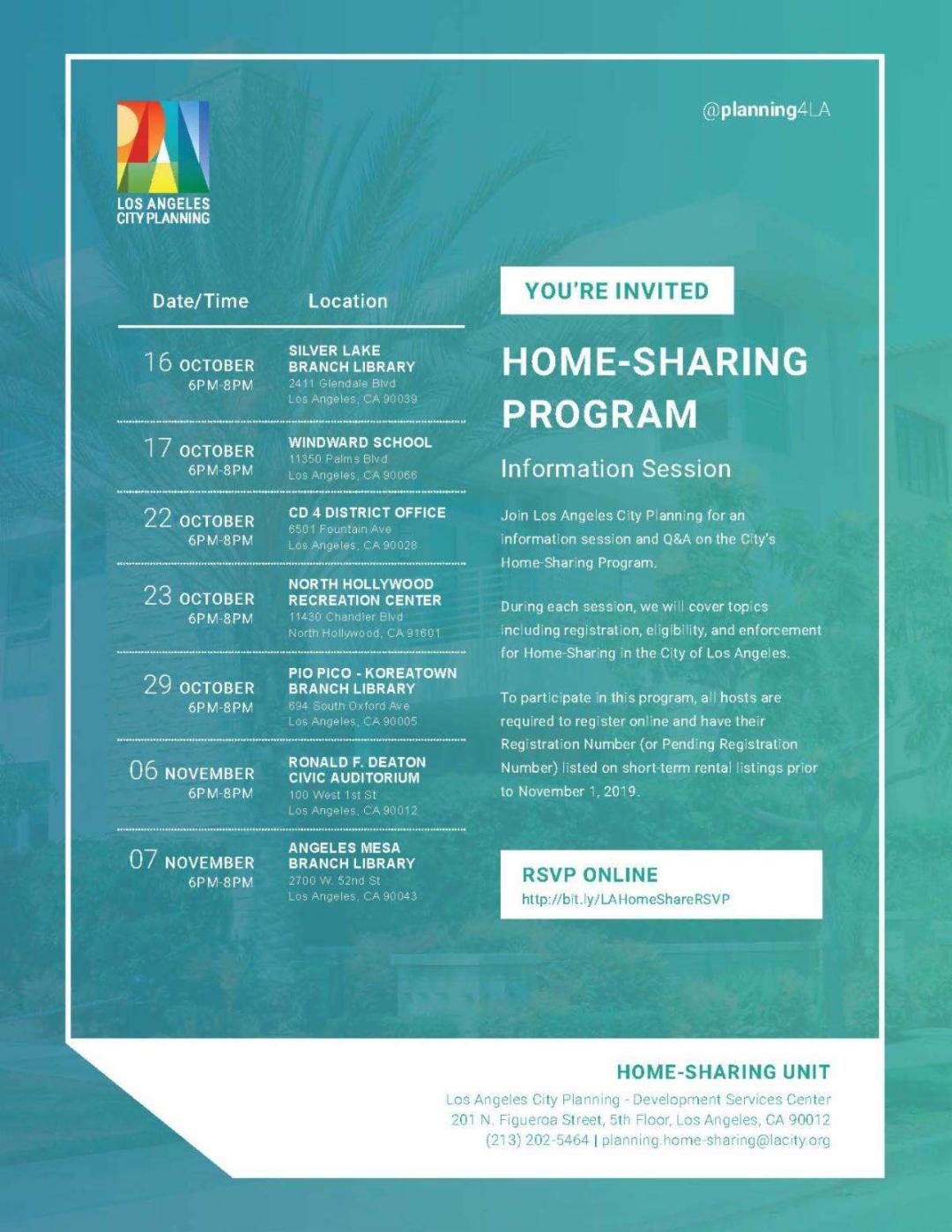 REMINDER: The City Council and Planning told the public that the Home-Sharing Ordinance will be enforced on November 1, 2019.  This must happen regardless of Airbnb’s scare tactics or whether Appendix A is passed at the October 22 hearing.  As a reminder, registration is done entirely online. For additional information, contact [email protected]. You can find the home-sharing registration portal here, along with a video tutorial on how to register and general home-sharing facts.

A recent Los Angeles Times article broke the story about Airbnb lobbying for L.A. to delay enforcing the new restrictions.

Airbnb’s Public Policy Manager, John Choi, is arguing that the company needs more time to build a computerized system to share their rental info with the City. Airbnb is trying to delay the enforcement as much as possible, so they can continue to make a profit at the expense of L.A. residents. Airbnb even threatened to let a tax deal they made with the City lapse, leaving the tech platform with no responsibility to provide L.A. with host’s collected taxes.

The City’s planning department responded to Airbnb, noting that there are many ways to comply with the new law – such as sharing a spreadsheet with the relevant information. Hopefully, Airbnb will obey the law and work with the City.

A recent Bloomberg article revealed that Airbnb plans to go public through a direct listing rather than an IPO. A traditional IPO would force Airbnb to show investors their books – which includes their illegal backdoor tax deals with cities across America. This could hurt their overall goal of going public.

Thank you for staying the course, and we hope you will take action on the information we’ve provided – send a letter, attend a hearing or email us back with your stories of short-term rental mal-practice.